These articles dated 5/22/1940 and 5/29/1940 mentions the Thyne-Trask Cowboys softball team playing on Parkhurst Field as well as Darling Field in Gloversville.

In 1940, they played against the Wittigs, Simon‟s Softball team, St. Paul AC of Amsterdam, Frankel Mohawks of Amsterdam and their “archrivals”, the Rhineharts. 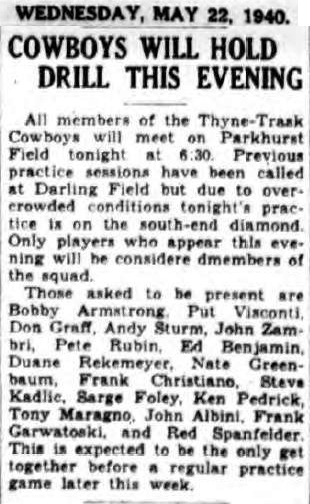 COWBOYS WILL HOLD DRILL THIS EVENING

All members of the Thyne-Trask Cowboys will meet on Parkhurst Field tonight at 6:30.  Previous practice sessions have been called at Darling Field but do to overcrowded conditions tonight’s practice is on the south-end diamond.  Only players who appear this evening will be considered members of the squad.

The Thyne-Trask Cowboys,  who have been waiting for a break in the weather for the past several days,  will attempt to open their season this evening,  meeting the Marts in a softball battle scheduled for Parkhurst Field.  The game will be called at 6:30.

The Marts have split the win and loss column in two starts this season while the Cowboys are entirely untried.

The Marts will have three hurlers ready for battle;  Spike Kennedy,  Don Kennedy and Terry,  former hardball speedball artists of Cornell University,  who makes his home in this city.  Tallon will complete the battery.  The Cowboys will use Sarge Foley,  Joe Querbes,  and Ed Benjamin on the mound with Johnny Zambri behind the plate.  All players desiring transportation to Parkhurst Field are asked to meet at Thynes on the four corners not later than 6:15.