August 10, 1914 by David Karpinski in Dansforths

Women have been playing baseball in the New York metropolitan area almost as long as baseball itself has been in existence.

Shortly after the first professional men’s teams formed in the late 1860s, women began forming various recreational “base ball” clubs. Then in 1910, ballplayers Dan Whalen, Joe Manning, and Eddie Manning formed the New York Bloomer Girls, a team that was to have many successes in the following 23 years. 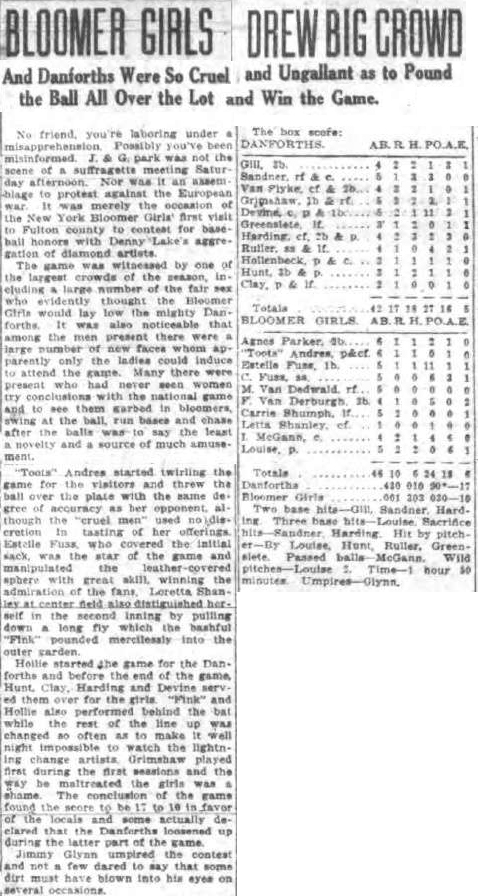 And Dansforths Were So Cruel and Ungallant as to Pound the Ball All Over the Lot and Win the Game.

No friend you’re laboring under a misapprehension. Possibly you’ve been misinformed. J. & G. park was not the scene of a suffragette meeting Saturday afternoon. Nor was it an assemblage to protest the European war. It was merely the occasion of the New York Bloomer Girls first visit to Fulton county to contest for baseball honors with Denny Lake’s aggregation of diamond artists.

The game was witnessed by one of the largest crowds of the season, including a large number of the fair sex who evidently thought the Bloomer Girls would lay low the mighty Dansforths. It was also noticeable that among the men present there were a large number of new faces whom apparently only the ladies could induce to attend the game. Many there were present who had never seen women try conclusions with the national game and to see them garbed in bloomers, swing at the ball, run the bases and chase after balls was to say the least a novelty and source of much amusement.

“Toots” Andres started  twirling the game for the visitors and threw the ball over the plate with the same degree of accuracy as her opponent, although the “cruel” men used no discretion in tasting her offerings.  Estelle Fuss, who covered the initial sack, was the star of the game and manipulated the leather covered sphere with great skill, winning the admiration of the fans. Loretta Shanley at center field also distinguished herself in the second inning by pulling down a long fly which the bashful “Fink” pounded mercilessly into the outer garden. he maltrea

Hollie started the game for the Dansforths and before the end of the game, Hunt, Clay, Harding and Devine served them over for the girls. “Fink” and Hollie also performed behind the bat while the rest of the lineup was changed so often as to make it well night impossible to watch the lightning change artists. Grimshaw played first during the first sessions and the way he maltreated the girls was a shame. The conclusion of the game found the score to be 17 to 10 in favor of the locals and some actually declared that the Dansforths loosened up during the latter part of the game.

Jimmy Glynn umpired the contest and not a few dared to say that some dirt must have blown into his eyes on several occasions.