July 6, 1931 by David Karpinski in Diversity

This article, dated 7/8/1931 recaps the game between the Clowns and the local Eagle team, which the Clowns won 12-1. The game featured a gigantic catcher’s mitt which measured 3 feet long by 2 feet wide and weighed 12 lbs. 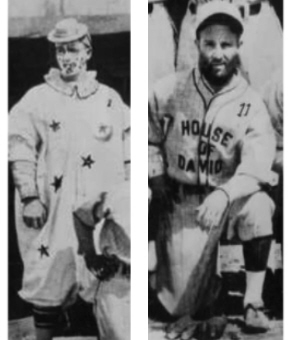 This article dated 7/6/1931 promoted an upcoming game featuring the Gloversville Eagles vs the Detroit Clowns. The Clowns were well a well known and talented barnstorming ball club featuring Buster Kenny, a clown player at first base, and player/manager Pepper Martin, both former House of David players seen here in a 1920 photo. 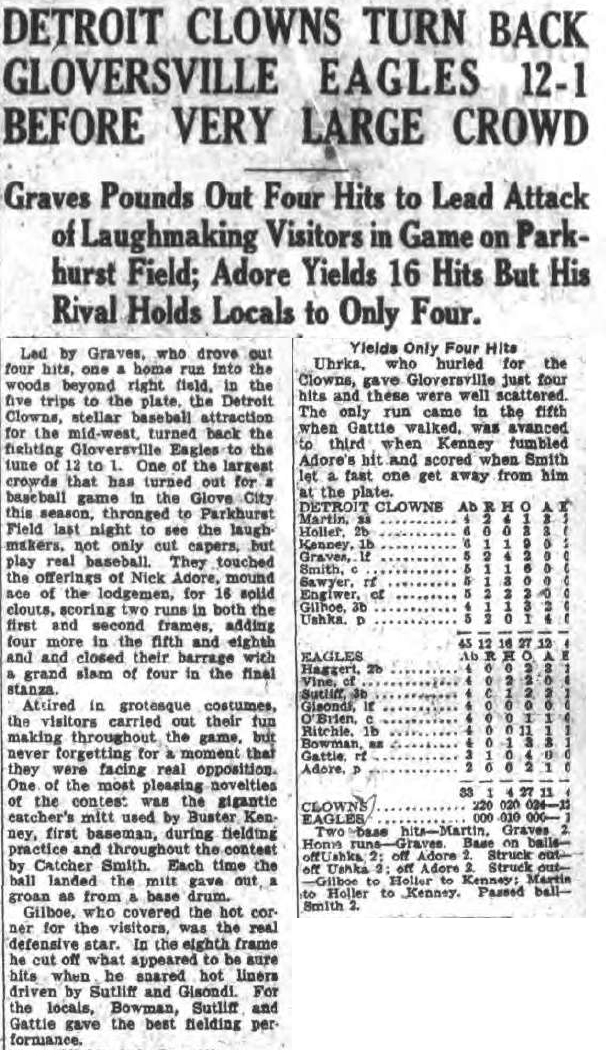 Graves Pounds Out Four to Lead Attack of Laugh-making Visitors in Game on Parkhurst Field; Adore Yields 16 Hits But His Rival Holds Locals to Only Four

Led by Graves, who drove out four hits, one a home run into the woods beyond right field in the five trips to the plate, the Detroit Clowns, stellar baseball attraction for the mid-west, turned back the fighting Gloversville  Eagles to a tune of 12 to 1. On e of the Largest crowds that has turned out for a baseball game in the Glove City this season, thronged Parkhurst Field last night to see the laugh-makers, not only cut capers but play real baseball. They touched the offerings of Nick Adore, mound ace of the lodgemen for 16 solid clouts, scoring two runs in both the first and second frames, adding four more in the fifth and eighth and a closed their barrage with a grand slam of four in the final stanza.

Attired in grotesque costumes, the visitors carried out their fun making throughout the game, but never forgetting for a moment that they were facing real opposition.

One of the most pleasing novelties of the contest was the gigantic catcher’s mitt used by Buster Kenney, first baseman, during the contest by Catcher Smith. Each time the ball landed the mitt gave out a groan as from a bass drum.

Gilboe, who covered the hot corner for the visitors, was the real defensive star. In the eighth frame he cut off what appeared to be sure hits when he snared hot liners driven by Sutliff and Gisondi. For the locals, Bowman, Sutliff and Gattle gave the best fielding performance.

Uhrka, who hurled for the Clowns, gave Gloversville just four hits and these were well scattered. The only run came in the fifth when Gatttle walked was advanced to third when Kennney fumbled Adore’s hit and scored when Smith let a fast one get away from him at the plate.

Buster Kenny is features as Best Clown Player in Country is Conceded to be Rival of Nick Altrock’s Job; Game will be Called at 6:15 on Parkhurst Field Tomorrow Night.

Pepper Martin, elongated manager and star shortstop for the Detroit Clowns  declared yesterday he would have his best performance clowning as well as playing baseball when they hook up with the Gloversville Eagles on the Pankhurst field tomorrow evening at 6:15. The team has some first class baseball players on the roster,who can play ball as well as pull a bit of comedy along with the plays.

Buster Kenny, who for three years played first base for the House of David outfit, is featured as the best clown player in the country. He is conceded to be the outstanding rival for Nick Atrock’s job as the greatest clown of all. Buster manipulates his cigar while playing first.

Besides a clever first baseman, the clowns have a real player in Jim Smith who works behind the plate. He is not only the best catcher on any of the teams roaming around the country, but one of the biggest men with the clowns.

In addition to a bunch of clowns the outfit will use on the field the biggest catcher’s mitt now in existence. The mitt was specially made for the outfit by the Draper-Maynard Company. It weighs 12 pounds and has two feet ten incheslong and two feetand four inches wide. The mitt always brings out as many laughs as a two ring circus.

As the team takes the field here the Eagles will present a changed lineup again as a number of new players have been added.