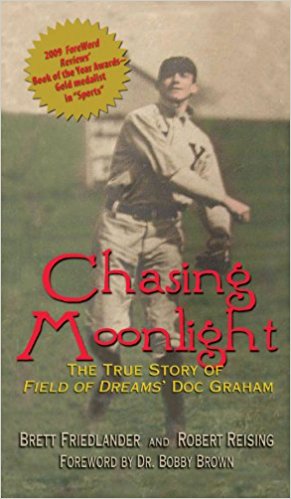 JULY 16, 2018:  David Karpinski, Executive Director of the Parkhurst Field Foundation announced that the Foundation has signed a book deal with the authors of “Chasing Moonlight”, an inspirational book about Moonlight ‘Doc’ Graham of the movie fame “Field of Dreams”.  In 1906 and 1907, Moonlight Doc Graham played seven documented games at A.J.&G. Park/Parkhurst Field as he pursued his dream of making it big in Major League Baseball.

In “Chasing Moonlight”, Brett Friedlander and Robert Reising prove that truth is more interesting than fiction. The real-life Moonlight Graham didn’t play just a half-inning for John McGraw’s New York Giants, as depicted in Field of Dreams. Neither did he retire from baseball after his lone major league appearance. Rather, he became a fan favorite during a noteworthy professional career, all the while juggling baseball with medical residencies.  The JAGs, the local semi-pro team which played at Parkhurst Field from 1906-1908, are mentioned in the classic book a number of times as it chronicles the playing career and life of Graham.

Robert Reising stated, “As the co-author of “Chasing Moonlight”, I am delighted that the Parkhurst Field Foundation has committed to assisting efforts to keep alive a story as inspiring as it is enriching.  Archibald Wright “Moonlight” Graham possessed uncommon intelligence and integrity and remained throughout his lifetime unshakable in his belief that service to humankind merited primacy among his priorities, regardless of the personal and professional price to be paid.  The University of Central Arkansas, with its recently created “‘Moonlight Graham Sports Medicine Award,” shares my delight that the Foundation has joined the struggle to honor an exemplary human for decades to come.”

“The partnership between “Chasing Moonlight” and the Parkhurst Field Foundation is a natural, because it allows a new generation of ballplayers to learn the true story of Moonlight Graham’s life and career while helping to give them a beautiful and historic place to do what the good doctor loved most … play baseball,” added Brett Friedlander.

Karpinski explains, “The Foundation has secured the remaining book inventory from the publisher and will make the book available for sale through a number of book stores and outlets, including the Baseball Hall of Fame, and at our future park’s gift shop.  All proceeds from the sale of the book will go to our capital campaign to re-develop Parkhurst as a baseball destination.  We will also give a copy of the book as our ‘thank you’ to all donors who donate more than $50 to our campaign.”

To support the capital campaign or purchase a copy of Chasing Moonlight, visit their website at www.parkhurstfield.org or the Parkhurst Field facebook page.

The Parkhurst Field Foundation, a 509(a)2 non-profit foundation, was formed to promote and preserve Parkhurst Field in Gloversville, NY, recognized as the ‘Original Field of Dreams’ and the oldest baseball grounds used by any Little League® in America.  Our mission is to chronicle its rich history, promote its historic significance through media and events, attain grants and donations to fund its re-development as a baseball destination and ongoing economic revitalization diamond for the region.  Our success will ensure its sustainability and create a role model for other communities looking to preserve their athletic parks.  www.parkhurstfield.org