March 18, 1949 by Aaron Mittler in Uncategorized

This article dated 3/18/1949 states that the Knights of Columbus were to field a baseball team in the Bi-County League for the 1949 Season and play on Parkhurst Field.

Improvements were to be made to the fields.

The team would be led by Claude Walrath and managed by Dom Collie and would include Jack Holmes and others on the  team. 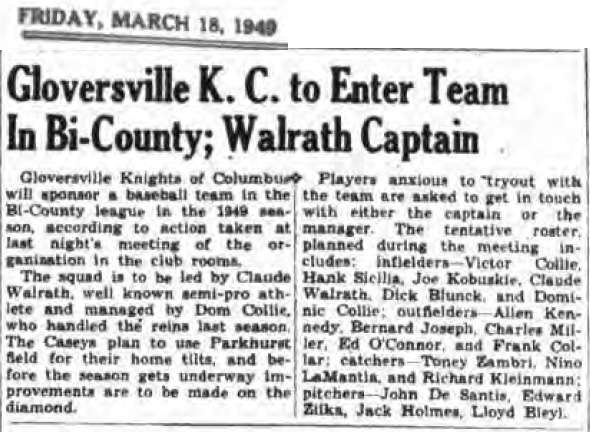 Gloversville Knights of Columbus will sponsor a baseball team in the Bi-County league in the 1949 season,  according to action taken at last night’s meeting of the organization in the club rooms.

The squad is to be led by Claude Walrath,  well known semi-pro athlete and managed by Dom Collie,  who handled the reins last season.  The Caseys plan to use Parkhurst field for their home tilts,  and before the season gets underway improvements are to be made on the diamond.