House of David at Parkhurst 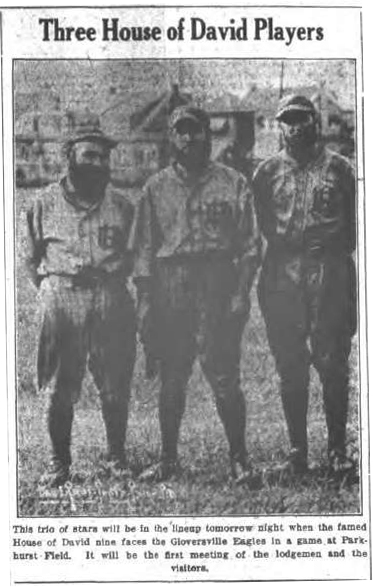 This picture and article dated 7/27/1931 promotes the upcoming game between the famed House of David team against the Gloversville Eagles at Parkhurst Field From 1917-1955, the long-haired, and bearded team from the commune in MI traveled the country. They didn’t shave because of their faith. The team members‟ mission was two fold: Spread the word about their colony, and also send some money back home to the colony. Babe Ruth was offered a contract to play toward the end of his NY Yankees career, and Hall of Fame pitcher Grover Cleveland Alexander served as a player-manager of one of the House of David traveling teams from 1931-35.

An unusual attraction for local baseball fans will be staged Tuesday night at Parkhurst field when at 6:15, the famous and un-barbered House of David diamond nine will be guests in the city, facing the Gloversville Eagles in what promises to be one of the best games of the season. The bearded visitors will provide a novelty bit of entertainment, as well as affording the lodgemen that brand of competition which has made the team a great road attraction.

Errorless ball if commonplace with the House of David nine and the Eagles will be on their toes for the encounter. Including in their lineup a brilliant galaxy of stars, whose performances have thrilled fans in many a city.

Plans are being made by the Birdmen to accommodate the largest crowd of the Season at Parkhurst Field.

Indian Lake defeated the Eagles 2 to 0 in a game played yesterday at Indian Lake. Hobbs pitched to Phelps for the locals and Gotteib twirled to Allen for the Indian Lake team. Each team got seven hits.