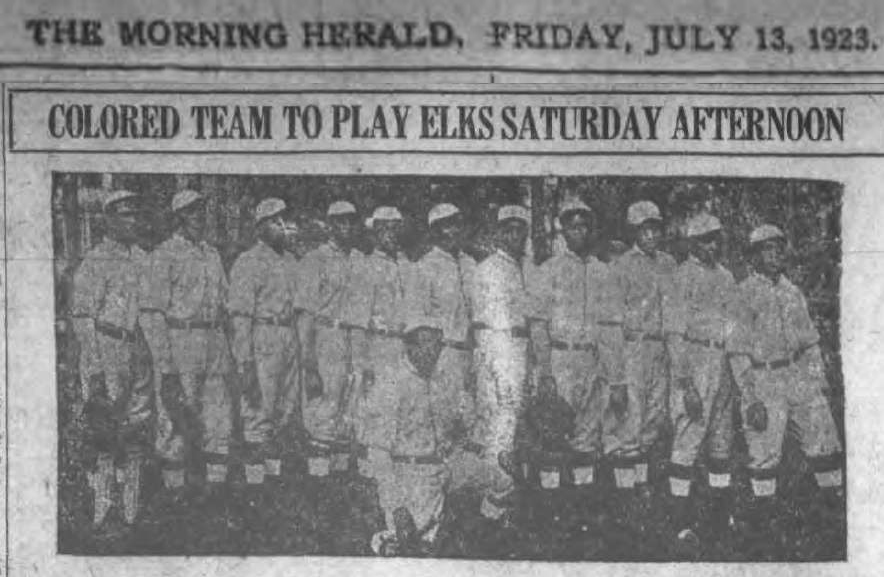 This article dated 7/13/1923 promotes an upcoming game featuring the Havana Red Sox against the local Elks team at Parkhurst Field. On Sept. 7, 1913, the Red Sox played their first game in Watertown, NY.The Havana Red Sox were managed by John “Pop” Watkins. It was one of those “Cuban” teams with no actual Cubans on it. They generally played area semipro or amateur.

“Pop” Watkins and his Havana Red Sox,  who have won 36 games this season and only lost seven,  will be there Saturday afternoon to play the Elks at Parkhurst Field.  Manager Forbes of the Elks says that the articles have been signed and the color nine will be on hand.

Among the teams that the Red Sox have beaten this season are the Baltimore Black Sox,  by the score of 5 to 4 on the fourth of July;  the Potomac’s of Washington, D.C., 9 to 4.  The Potomac’s have defeated the Brooklyn Cuban Stars,  the Hilldale’s of Philadelphia  and other fast semi-pro teams.  The Potomac’s are rated as the best semi-pro team in the country.

Well known is Watkins’ ability for picking promising players,  and that is just the type of men he has on his Havana Red Sox this season.  The majority of the Red Sox players are men from southern colleges,  who showed great ability to play the game and play it right while they were students,  in their various universities.

The Havana Red Sox players have proven a great drawing card all through western New York and Pennsylvania where they have been on a recent tour.

Umpire “Pipe” Clay will call the game at 3:30 o’clock.  Silverman will pitch for the Elks.

The fireworks for the visitors began in the third frame when four doubles and a triple put six runs across the rubber.

The Elks came back in their half of the third and scored two runs.  They also scored another in the fifth.  The Sox score in the sixth while the Elks managed to push their final tallies across in the seventh.

It was then any one’s game with the score 7 to 5 in favor of the Sox,  until the visitors came to bat in the ninth frame.  They pounded out four more runs for safety’s sake while the Elk team was helpless in the last frame.

Holmes did the receiving for the Elks and did well.  Gill played a good defensive game at third and secured two hits sharing honors with Sandner,  who also got two hits.

Thomas of the Sox featured with two long two-base hits.

Watkins developed a number of young players who went on to good careers in the Negro Leagues,  including Phil Cockrell, Dennis Graham, Toussaint Allen, George Dixon, Luke Archer, and others.

The local team lost 11-5 in the contest and featured local star, Bud Holmes, at catcher.