August 8, 2016 by Elizabeth Emery in Gloversville 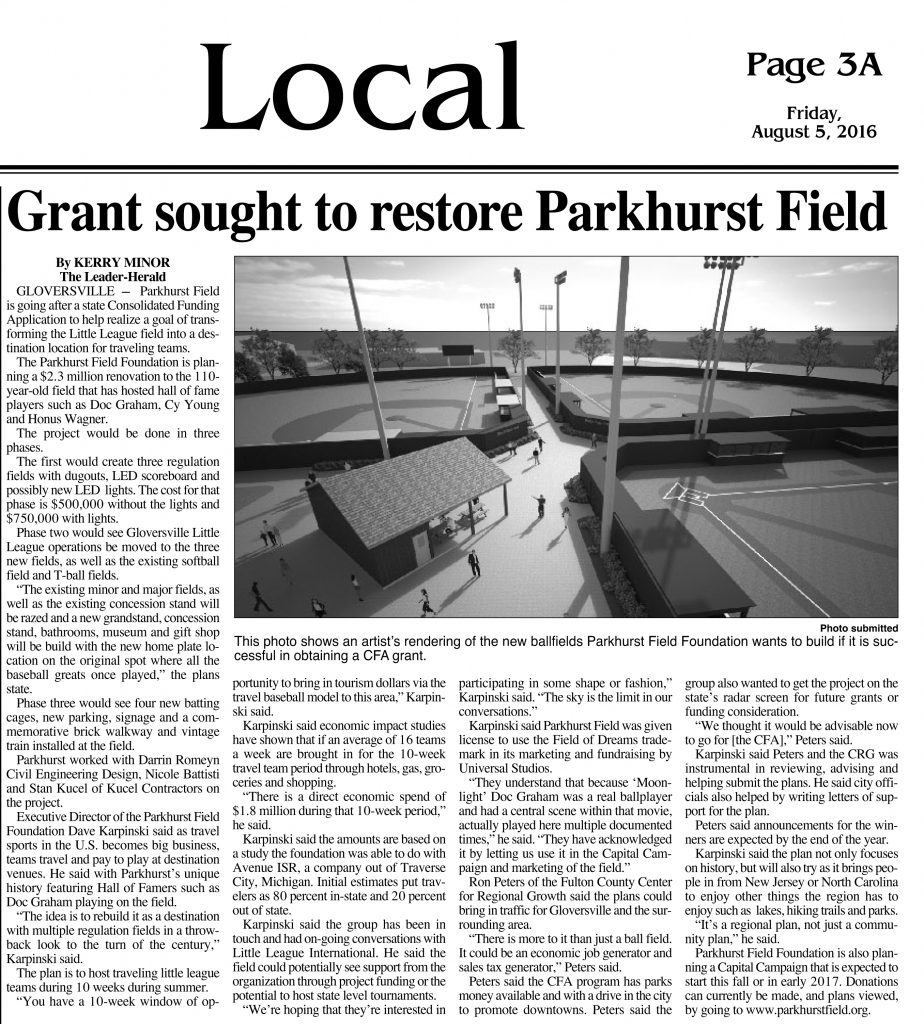 By KERRY MINOR
The Leader-Herald
GLOVERSVILLE – Parkhurst Field is going after a state Consolidated Funding Application to help realize a goal of transforming
the Little League field into a destination location for traveling teams.

The Parkhurst Field Foundation is planning a $2.3 million renovation to the 110- year-old field that has hosted hall of fame
players such as Doc Graham, Cy Young and Hanus Wagner.

The project would be done in three phases.

The first would create three regulation fields with dugouts, LED scoreboard and possibly new LED lights. The cost for that
phase is $500,000 without the lights and $750,000 with lights.

Phase two would see Gloversville Little League operations be moved to the three new fields, as well as the existing softball
field and T-ball fields.

“The existing minor and major fields, as well as the existing concession stand will be razed and a new grandstand, concession
stand, bathrooms, museum and gift shop will be build with the new home plate location on the original spot where all the
baseball greats once played,” the plans state.

Executive Director of the Parkhurst Field Foundation Dave Karpinski said as travel sports in the U.S. becomes big business,
teams travel and pay to play at destination venues. He said with Parkhurst’s unique history featuring Hall of Famers such as
Doc Graham playing on the field.

“The idea is to rebuild it as a destination with multiple regulation fields in a throwback look to the tum of the century,”
Karpinski said.

The plan is to host traveling little league teams during 10 weeks during summer.

You have a I 0-week window of opportunity to bring in tourism dollars via the travel baseball model to this area,” Karpinski said.
Karpinski said economic impact studies have shown that if an average of 16 teams a week are brought in for the I 0-week travel team period through hotels, gas, groceries and shopping.

“There is a direct economic spend of $1.8 million during that 10-week period,” he said.

Karpinski said the amounts are based on a study the foundation was able to do with A venue ISR, a company out of Traverse City, Michigan. Initial estimates put travelers as 80 percent in-state and 20 percent out of state.

Karpinski said the group has been in touch and had on-going conversations with Little League International. He said the field could potentially see support from the organization through project funding or the potential to host state level tournaments

“We’re hoping that they’re interested in participating in some shape or fashion,” Karpinski said. “The sky is the limit in our conversations.”

Karpinski said Parkhurst Field was given license to use the Field of Dreams trademark in its marketing and fundraising by Universal Studios.

“They understand that because ‘Moonlight’ Doc Graham was a real ballplayer and had a central scene within that movie, actually played here multiple documented times,” he said. “They have acknowledged it by letting us use it in the Capital Campaign and marketing of the field.”

Ron Peters of the Fulton County Center for Regional Growth said the plans could bring in traffic for Gloversville and the surrounding
area.

‘There is more to it than just a ball field. It could be an economic job generator and sales tax generator,” Peters said.

Peters said the CF A program has parks money available and with a drive in the city to promote downtowns. Peters said the group also wanted to get the project on the state’s radar screen for future grants or funding consideration.

“We thought it would be advisable now to go for [the CFA],” Peters said. Karpinski said Peters and the CRG was instrumental in reviewing, advising and helping submit the plans. He said city officials also helped by writing letters of support for the plan.

Peters said announcements for the winners are expected by the end of the year.

Karpinski said the plan not only focuses on history, but will also try as it brings people in from New Jersey or North Carolina to enjoy other things the region has to enjoy such as lakes, hiking trails and parks.

“It’s a regional plan, not just a community plan,” he said.

Parkhurst Field Foundation is also planning a Capital Campaign that is expected to start this fall or in early 201 7. Donations can currently be made, and plans viewed,by going to www.parkhurstfield.org.