Final sodding of the diamond and fields was to be completed.

A parade was planned, including the players and Gloversville Military Band, through the towns
by a train electric car

Opening Of New Baseball Park. Thursday July 12, to be Day, if Present Plans Do Not Miscarry-Utica to be the Visiting Club.

The formal opening of the A.,J. & G. baseball park between Gloversville and Johnstown, will take place Thursday, July 12, if the present plans carry. On that date the Utica Club will open a series of four games, and it is proposed to make the opening of the new grounds a memorable one to the baseball enthusiasts of the Glove cities.

It is planned to make a parade, the players of the A.,J.& G. and Utica clubs and the Gloversville Military band occupying big touring cars, or in event the management of the baseball association is unable to secure a car large enough to accommodate the band, the players and band will occupy an electric car which will be operated around the belt line in Gloversville and Johnstown and return previous to the opening game.

Workman are now engaged in sodding the diamond.  This will be completed today or tomorrow at the latest.  Another force of workmen is engaged in covering the outfield with a coating of loam which will be rolled down and seeded. This work will require the greater part of two weeks, providing there is no increase in the number of workmen now employed.  Still another force is employed in hauling and covering the grounds surrounding the entrance and carriageway with a coating of cinders which will pack down firmly and dry quickly in case of rain, thus providing an entrance that will be dry at all times and free from mud. Portions of the grounds that have been covered with loam are being raked and rolled preparatory to seeding.

Grand Opening of the Ballpark.  The Fulton county Republican, Thursday, July 12, 1906.  A,.J. & G. Park Completed.  Will be Ready for Opening Game Next Week.

The new A.J.G. baseball park between this city and Gloversville, is practically completed and ready for the opening game next week. The railroad company has spent considerable money in constructing it in a good substantial manner and in painting it with attractive colors has added considerably to the appearance of the locality.  The city of Gloversville should now remove the old dilapidated building on the north side of the road. 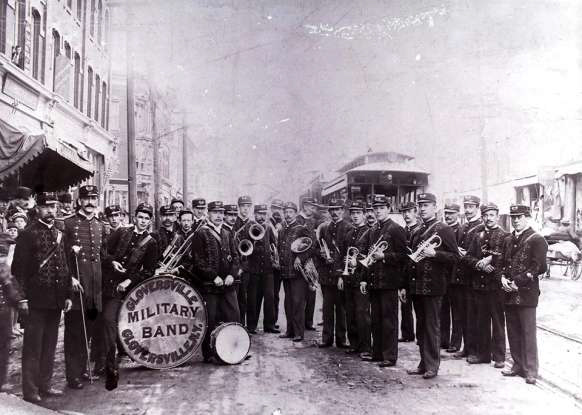 This picture, courtesy of the Fulton County Historical Society, is of the Gloversville Marching Band.

A parade was planned for the grand opening of the new park and was to include the ball players and Gloversville Military Band. It would route through the towns by a train electric car.