This article, believed to be July 1890 announces an application by Gloversville to join the State League for the upcoming season.

They were promptly referred to Mr. Case, who owned the local franchise. 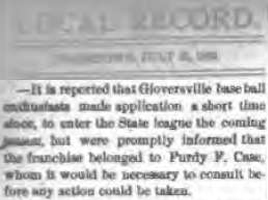 It is reported that Gloversville baseball enthusiasts made application a short time afore, to enter the State league the coming summer, but were promptly informed that the franchise belonged to Purdy F. Case, whom it would be necessary to consult before any action could be taken.

This article, dated 4/8/1890 announces the formation of the Johnstown & Gloversville Baseball
Association.

The meeting was held at the Eccentric Club in downtown Gloversville (still in existence) and committees and directors were selected.

They were promptly referred to Mr. Case, who owned the local franchise.

A large number of baseball enthusiasts met in the rooms of the Eccentric club last evening.  There was considerable talk about the matter and three directors were elected.

The director met in the Eccentric club room today and decided to call the association the Johnstown and Gloversville Baseball association.

The following officers were elected:  President M.F.Button: secretary and treasurer Eugene Moore;  league directors H.S. Judson: manager protem Purdy F. Case.  James A. Banta and Purdy F. Case were appointed a committee to see what grounds could be procured and report at the next meeting.  Messrs Judson and Case were appointed to secure players and uniforms.

The committee proposes to secure good players and it is the determination of the boys to come at the end of the season with their noses close to the wire.

This article dated 3/30/1893 is the first proof of the forming a baseball league that included Fulton County and surrounding towns.

It was organized by Harry Devendorf (1859-1925), who was private secretary for five different congressmen, including Congressman Emerson of Warren County, Lucius N. Littauer of Gloversville, John K. Stewart of Amsterdam, James M.E. O’Grady of Rochester and Congressman Flack of Malone

He was also former secretary to the US Vice-President James S. Sherman during President William McKinley’s
Administration 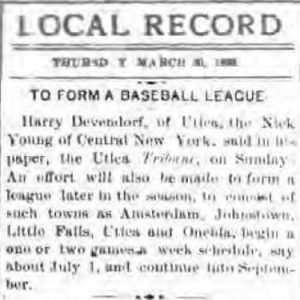 Harry Devendorf, of Utica, the Nick Young of central New York said in the paper,  the Utica Tribune, on Sunday An effort will also be made to form a league later in the season to contest of such towns as Amsterdam, Johnstown, Little falls, Utica and Oneida, Begin a one or two game a week schedule, say about July 1, and continue into September.