Drawing Crowds… not on Sundays

Originally Known as A.J.&G. (Amsterdam, Johnstown & Gloversville) Park, the local railroad company, F,J&G, built the park as a tourist attraction and stop on the railroad.

But, you couldn’t have fun playing or watching baseball on Sundays yet….

This article dated 5/19/1908 warns that playing ball on Sundays could get you arrested in Gloversville!

Note that the new ballpark was drawing 2,000 fans a game, too. 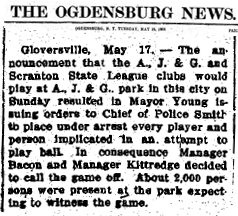 The announcement that the A., J.and G. and Scranton State League clubs would play at A., J. and G. park in this city on Sunday resulted in Mayor Young issuing orders to Chief of Police Smith to place under arrest every player and person implicated in an attempt to play ball.  In consequence Manager Bacon and Manager Kittredge decided to call the game off.

About 2,000 persons were present at the park expecting to witness the game.