George Burns spent most of his career with the NY Giants, patrolling left field in the Polo Grounds. Sportswriters dubbed the left-field bleachers “Burnsville” as the pint-sized speedster rapidly established himself as a fan favorite. He led the NL in runs scored a record five times and also led the league in walks five times and stolen bases twice. He holds the Giants franchise record for stolen bases in a single season (62, in 1914), and held the club’s record from 1919 to 1972.

On 12/6/21, the NY Giants traded Burns to the Reds but held a “George Burns Day” on 6/12/22. As part of the ceremonies, the Giants hoisted their 1921 Championship flag with Burns (in his Cincinnati uniform) leading the procession.

He also designed and endorsed a patented baseball glove for a local company, Ken-Wel. 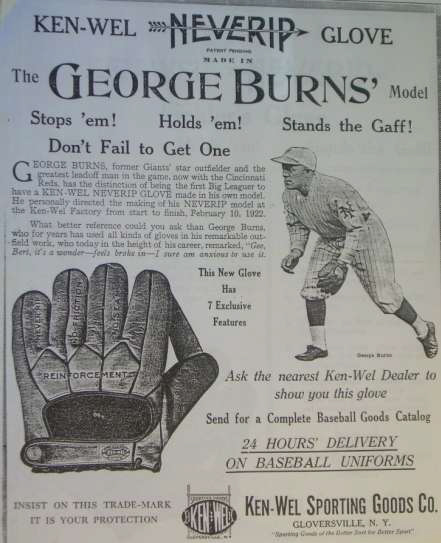 MADE IN THE GEORGE BURNS’ MODEL

Don’t Fail to Get One

George Burns,  former Giants’ star outfielder and the greatest leadoff man in the game,  now with the Cincinnati Reds, has the distinction of being the first Big Leaguer to have a KEN-WEL NEVERIP GLOVE made in his own model.  He personally directed the making of his NEVERIP model at the Ken-Wel Factory from start to finish, February 10, 1922

What better reference could you ask than George Burns,  who for years used all kinds of gloves in his remarkable outfield work, who today in the height of his career remarked, Gee Bert,  it’s a wonder—-feels broke in—-I sure am anxious to use it.

This New Glove Has 7 Exclusive Features

Ask the nearest Ken-Wel Dealer to show you this glove

INSIST ON THIS TRADE-MARK IT IS YOUR PROTECTION