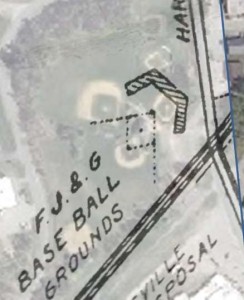 NEW BASEBALL GROUNDS. –Diamond Will Be Laid Out so Sun Will Not be in Players Eyes

“It is stated in connection with the new ball grounds that it is the intention of the F., J. & G. Railroad company to ask the city council in the near future for a franchise for a line through Harrison street leading from the Cayadutta division to the steam division, thus forming a belt line between Gloversville and the new park and Johnstown and the grounds.

By this arrangement, transportation facilities of unequalled nature would be obtained, and as the cars would pass the front entrance, it would be possible for the railroad company to handle the large crowds in a prompt and expeditious manner.

It is also announced that the diamond will be laid out according to the plans of Manager Earl and will be so arranged that the sun will not shine directly in the outfielders’ eyes, which was of the main causes of dissatisfaction with the