A New Park in the Planning

This article dated 9/14/1888, details the desire for a “driving park, baseball ground and general sporting place” in the city of Gloversville, New York.

This is the earliest record we have of the desire to build a baseball park, as the game was gaining in popularity.

This would lead to interest in building what would eventually be known as A,J&G Park (JAG Park)….and Parkhurst Field! 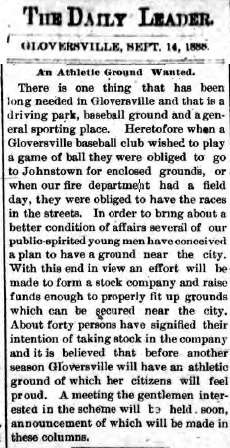 There is one thing that has been long needed in Gloversville and that is a driving park, baseball ground and a general sporting place.

In order to bring about a better condition of affairs several of our public-spirited young men have conceived a plan to have a ground near the city.

With this end in view an effort will be made to form a stock company and raise funds enough to properly fit up grounds which can be secured near the city.

About forty persons have signified their intention of taking stock in the company and it is believed that before another season Gloversville will have an athletic ground of which her citizens will feel proud.

A meeting the gentlemen  interested in the scheme will be held soon, announcement which will be made in these columns.