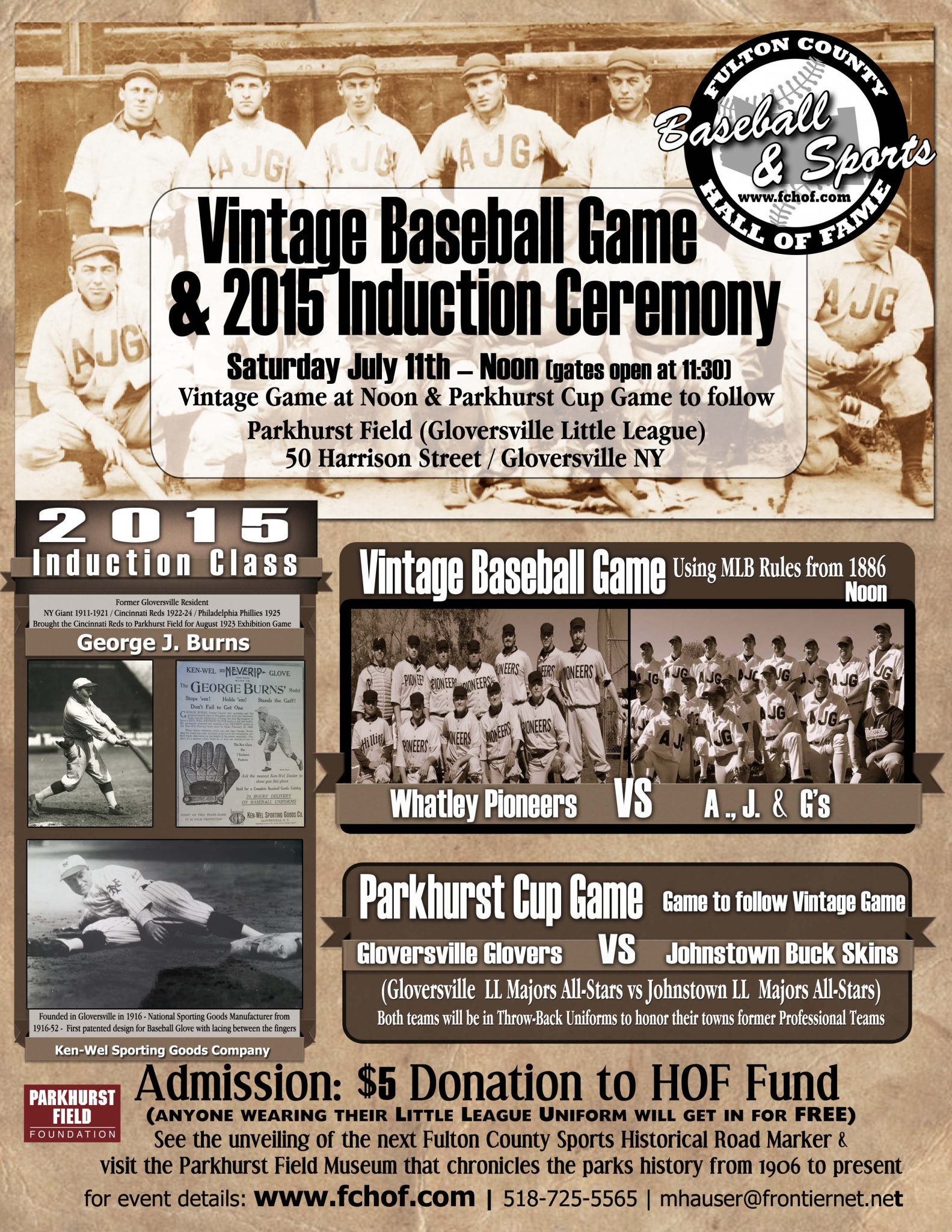 The Fulton County Baseball & Sports Hall of Fame will be holding its 2015 Inductions on Saturday July 11, 2015 at Parkhurst Field in Gloversville NY between innings of a Vintage Baseball Game.

His 2,077 career hits ranks him 240th amongst anyone who ever played Major League Baseball.  His 28 Steals of home ranks him 2nd All-Time in the National League, behind only HOF’er Max Carey.

A new “Contributors Category” is being added to the Fulton County Sports Hall of Fame for 2015, and will honor local companies who had an impact on Professional Sports on the National Level.  The first “Contributor Inductee” will be the Ken-Wel Sporting Goods Company who originated in Gloversville in 1916 making Baseball Gloves & Sporting Goods Equipment.

By 1924, there were more Ken-Wel gloves & mitts in use in Major League Baseball than all other brands combined.  It was that same year that Ken-Wel came up with the first patented design for a glove with lacing between the fingers.  Representatives of both the Burns Family & Kennedy Family (founders of Ken-Wel) will be in attendance to receive the Inductees HOF Plaques.

Two games will be played that day, with the first being a Vintage Baseball Game using the MLB rules in place in 1886 that will take place between the Whatley Pioneers of Western Massachusetts and the local A., J. & G Team.  The A., J. & G team will be comprised of former Gloversville Little Leaguers who once played at the historic Parkhurst Field site.  Both teams will be wearing turn of the century style uniforms, while using period authentic gloves, balls & bats.

According to event Co-Chairman Mike Hauser, “We are excited to be honoring one of Fulton Counties most accomplished Professional Baseball Players with the induction of Burns, and one of its most influential manufacturing companies who had an impact on the evolution of the Baseball Glove and the game as we know it today”.

At the conclusion of the Vintage Game, representatives from the Fulton County Museum will be on hand to help unveil the next two Fulton County Sports Historical Society Road Markers that denote important Sports History sites in Fulton County.  The Parkhurst Field Museum, which chronicles the history of the facility since 1906, will be open to the public all day.  Admission to the game is a $5 donation to the groups HOF Fund.  Gates open at 11:30am, with the HOF Inductions & Vintage Game beginning at noon.  Parkhurst Field/Gloversville Little League is located at 50 Harrison Street in Gloversville.